When the kids were younger, we camped at least once a year with the Clumbs and Hofmeisters. It was so much fun. We even have a camping name for our group. It’s a combination of our three last names, “Clustymeister”. It was such a treat when it was Mike and Lynne Clumb’s night to cook. Mike always brought spaghetti and meatballs (because I organized the menu and I strongly requested he bring it – he really didn’t have a choice). The recipe is actually from Mike’s grandfather, Olindo Mastropaolo, from Sicily. Mike prepared the marinara and meatballs in advance at home. He slowly simmered the sauce and made a gazillion meatballs. No matter how many meatballs he made, it was never enough. Tonight was the first time I made his recipe. It was a fabulous meal. This meal tonight would have been much better if I was sitting outside our RV with the Clumbs and Hofmeister; Dining fireside at a picnic table using a paper plate, listening to Mike complain about how long this took to make and he can’t believe we ate so many meatballs – again! 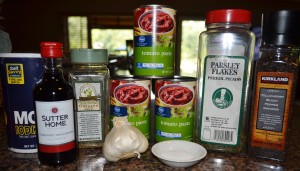 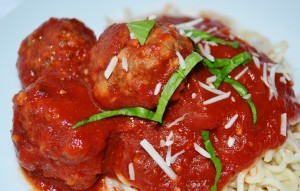 Bring to boil, reduce to simmer. Stir about every 15 minutes for 2 hours.